Home / Blogs / ROAD TRIP / On the Greens in Calgary

On the Greens in Calgary

The Postech road trip continues its progress toward the West, and it wasn’t until dusk that we hit the “border” of Saskatchewan and Alberta. 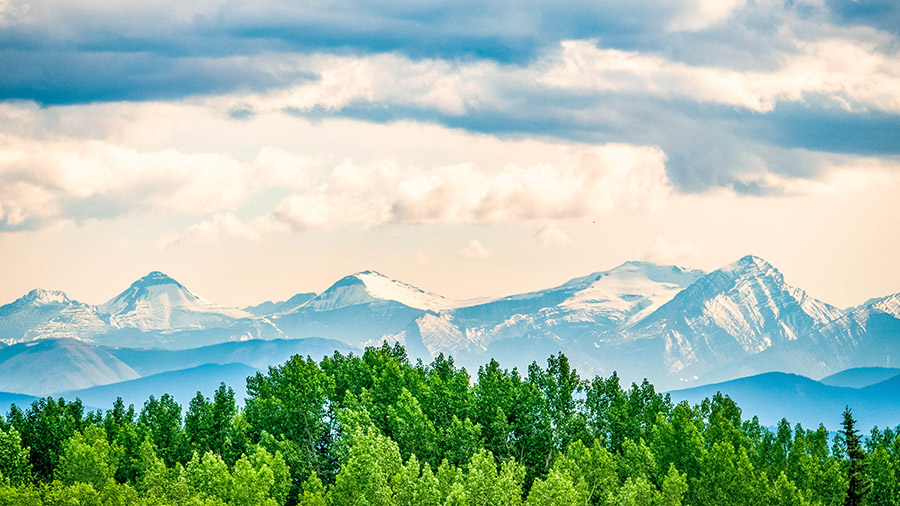 We cannot escape the road. We follow it, see it stretch before us. We live it. And in the Prairies, there sure is a lot of it! Silos dot the side of the road, and sometimes trains drive directly under them to refill before heading off again. The Postech road trip continues its progress toward the West, and it wasn’t until dusk that we hit the “border” of Saskatchewan and Alberta. At the intersection, we were met with four red posts with four massive poles, and at the foot of one of them: a plaque with the name and coat of arms of the two provinces. This was the symbolic representation of the border. We posed for a picture, of course, with one foot in each province, since it’s not every day that you can be in two places at once!

On the right side of the road, bordered with impeccably aligned powerline poles, we actually spotted a cowboy (!). The exact kind you would imagine: astride his horse and herding his cows through the West’s green stretches of land.

After another good hundred kilometers or so, we arrived in Calgary, Justin Petrovich’s city. He took over the local Postech dealership a little more than a year ago.

It was a beautiful, sunny afternoon at Earl Grey Golf Club when we met up with Justin and his family. His wife Michelle and his two sons were there, each with their golf bag and clubs, and each looking super stylish! As I had never golfed before, Michelle kindly let me borrow her equipment, and I got excellent tips from everyone. “Relax your shoulders”, “bend your knees a little”, “keep your eyes on the ball when you hit it, not toward the hole”. With a little concentration, I tried my swing again, and… yeah! By a stroke of beginner’s luck, my ball soared directly onto the green! After a few more hits, I sunk it into the hole! But I still wasn’t in the lead. Mario, who was passionate, but maybe a bit rusty, wasn’t either though! The Petroviches were dominating, but we all still had a fun time. Our team, on the other hand, got full points and more for grabbing ice cream for the kids after we left the green!

Michelle headed out with the boys; she needed to take the youngest to his friend’s birthday party. As for us, we followed Justin toward the Postech project that he wanted to show us: a neighbourhood sitting entirely on Postech Screw Piles! Around a hundred units in a fancy neighbourhood with a new development with an unrestricted view of the Rockies as a backdrop. A staircase connects two roads, and the concrete structure is completely supported by Postech screw piles. Each house in the neighbourhood also accounts for two of the screw piles that Steve installed, which support the wooden posts for all the homes’ decks. “We made it in several phases and in total, I must have put in 250 screw piles here”, Justin estimates.

One house in particular has more screw piles than the others. “Since it’s basically an artificial hill, the ground is soft and this house has had a tendency to slump. Cracks were appearing on the interior when the owner called us to see if we could do anything about it”, Justin explained to us. The operation was spectacular, because in order to get to the back of the house across the steep lawn, Justin had to call for a crane to pick up his excavator and move it over to the worksite. “Once we put in the screw piles, everything was set straight! The owner was so happy, and you couldn’t even tell where we installed the supports”, the Calgary dealer said proudly.

After filming, we invited Justin out for some good steak, because on the list written up by our team of things to do, our trip to Alberta could not end in anything other than a sweet bite of AAA Angus! Once our plates were empty and our stomachs full, we retook the road toward the Rockies, the magnificent and proud mountains sporting their snowy peaks even during the middle of June. We travelled through fields of ice, marvelling at the almost lunar, almost wild scenery. Superb, breath-taking… We don’t have words strong enough to describe just how beautiful the countryside was. Mario even had the chance to take a photo that he had been imagining for a long time: the sunrise over Lake Moraine. Just like during the rest of our adventure, we love the technical challenge just as much as the feeling of achieving something, and the emotions that it brings. Enjoying the lakes, and gazing all the way up to the mountain peaks… The Rockies definitely rank among one of the best steps of the Road Trip, which now continues its journey even further to the West.